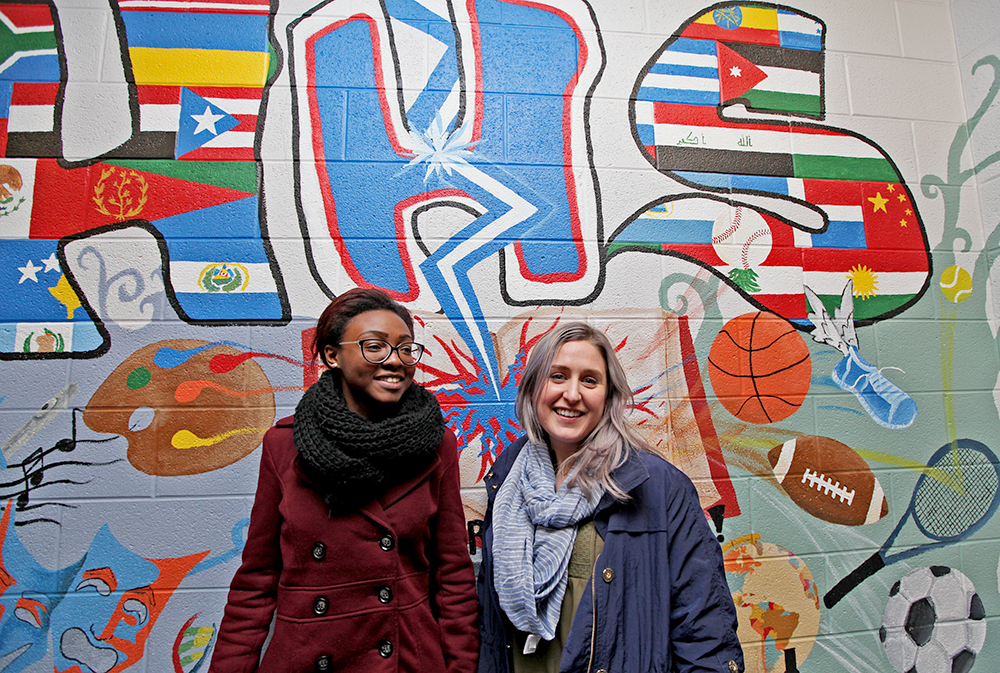 (20170407) - (Harrisonburg) Erin Overstreet (right) has been a mentor for Grace Meiser, a HHS senior, since she was 8-years-old through the Big Brothers Big Sisters program. (Holly Marcus / Special to the DN-R)

Sister Of The Year

PETE DeLEA Daily News-Record
PUBLICATION: Daily News-Record (Harrisonburg, VA)
SECTION: News
DATE: April 14, 2017
HARRISONBURG — Eight years ago, Grace Meiser, a shy 8-year-old student at Spotswood Elementary School, met a nervous but talkative 26-year-old Erin Overstreet.
Through the years, as part of Big Brothers Big Sisters of Harrisonburg-Rockingham County, the two formed a lifelong bond.
“She is definitely family,” said Overstreet, adding that as an adopted child like Grace, she knows you don’t need to be blood related to be family. “Anybody that loves you and cares for you is family.”
The compelling story of love, friendship, mentorship and sisterhood earned Overstreet, now 34, the 2017 Virginia Big Sister of the Year award in March. She’s now in the running for the national award, which will be presented at the BBBS national conference in June in San Diego.
Grace, a 17-year-old senior at Harrisonburg High School, knew Overstreet would be stiff competition for other members of the Big Sisterhood.
“She does so much for the community,” said Grace, the daughter of Harrisonburg residents Gene and Jane Meiser.
Matching Up
Their story began in early 2008, when Overstreet was chatting with a friend who recently enlisted in the cause.

(Photo: Erin Overstreet (right), 34, has been a mentor for Grace Meiser, 17, a Harrisonburg High School senior, since Grace was 8 years old through Big Brothers Big Sisters of Harrisonburg-Rockingham County. They’re seen outside HHS on April 7. Photos by Holly Marcus/Special to the Daily News-Record.)
“She was telling me stories about how much fun they were having, and I was looking for a way to get involved in the community,” said Overstreet, a digital sales director for Gray Television, the parent company of WHSV-TV3.
Originally from Fredericksburg, Overstreet graduated from James Madison University. At the time she met Grace, she was an account executive at WHSV.
Meanwhile, Grace knew friends who had big sisters and eventually joined the roster of little sisters when she stumbled upon BBBS at a community event.
“I always wanted one,” she said.
Overstreet went through the background checks and filled out a form describing her interests.
A few months went by, and a BBBS matching specialist presented her with three possible matches.
She carefully reviewed the forms of each child. Grace’s stood out.
“I remember her form,” said Overstreet, who now serves on the local chapter’s board of directors. “She said her favorite colors were pink and purple. She loved sports and shopping. I said, ‘I can relate to this kid.'”
After they matched, Overstreet went to Grace’s home.
“Grace was so quiet,” she said. “I was thinking, ‘How am I going to find something to do to keep her entertained?’ But by the second meeting, it was really natural. It came really easy.”
A Hundred Year History
BBBS has been matching what it calls “bigs” and “littles” since 1904.
Ernest Coulter, a New York City court clerk, started Big Brothers after noticing young boys constantly going through the court system. The Ladies of Charity started a similar program for girls around the same time. They would later merge in 1977.
The local BBBS chapter is in its 41st year.
It is the largest program in the state, serving 611 children in 2016. So far in 2017, it has served 450, with a goal of 650.
Locally, according to BBBS statistics, about 75 percent of the children come from homes below the poverty level; about 50 percent come from single-parent homes; and 8 percent have one parent in state prison. That doesn’t include those incarcerated locally.
Sue Totty, the local chapter’s executive director for the last six years, said the high numbers are the result of the number of volunteers. About 75 percent of the “bigs” are James Madison University students.
But there is a downside to its volunteer base.
“This spring, we have over 50 of our volunteers that are graduating,” said Totty. “So, when students graduate and move on, of course, the match closes.”
BBBS then decides whether to rematch the child.
“If they have had a successful match … matched for close to two years … they might not be rematched because we have so many on the waiting list,” said Totty. “Sometimes, there are circumstances that we decide that we would like to try and rematch them.”
In some cases, like Overstreet and Grace’s, the match continues for years, even past its formal end at high school graduation.
That’s what Overstreet wants.
Building A Relationship
The sisters’ success was solidified on the second outing, Overstreet said.
She picked up Grace and took her to downtown Harrisonburg.
They walked to a dollar store, bought chalk and went to a nearby parking lot to play hopscotch.
“It was fun. It was silly, and that’s when we really got to talk about what she wanted to do,” Overstreet said.
Grace’s first memory of Overstreet is in the kitchen. They made gingerbread cookies.
“The hand mixer pretty much blew up on me,” Overstreet said. “There was dough everywhere. She learned I’m not the best baker, but we’re still trying. I’m still burning things.”
Grace knew she’d be the lead baker in the relationship.
“We’ve baked brownies, cupcakes and gigantic Rice Krispies treats,” said Grace. “I usually take the lead now. She’ll try, but I end up finishing it.”
Through the years, and as Grace grew up, the activities changed.
When she was younger, the two made crafts. Now, they get pedicures, shop for a prom dress and fill out college applications. Grace wants to study fashion design.
The two also participated in volunteer projects, including the Toy Convoy, Stuff the Bus and Meals on Wheels.
“Grace’s generosity has blossomed in so many ways,” said her mother, Jane Meiser, 55, who’s grateful for Overstreet’s love and attention to her daughter. “There’s never enough support and love a kid can have.”
Forever Sisterhood
For Grace’s 17th birthday, Overstreet bought her a used car.
“I had been putting money aside for her for a couple of years,” she said, adding that the car was more than just a gift for Grace — it was a life lesson.

(Photo: Overstreet, who earned the 2017 Virginia Big Sister of the Year award in March, is in the running for the national award, which will be presented at the BBBS national conference in June in San Diego.)
“I just wanted her to have the opportunity to have the responsibility. She uses it to get to work. … She works to pay part of her car insurance, and I just wanted her to feel special.”
Grace recalls going to Overstreet’s house for a birthday party and didn’t notice the 2004 Nissan Altima.
“I walked right by the car. … It even had a bow on it,” she said. “I really wasn’t expecting it.”
In two weeks or so, Grace will graduate, and the match with Erin will, officially at least, end.
But the sisterhood will continue.